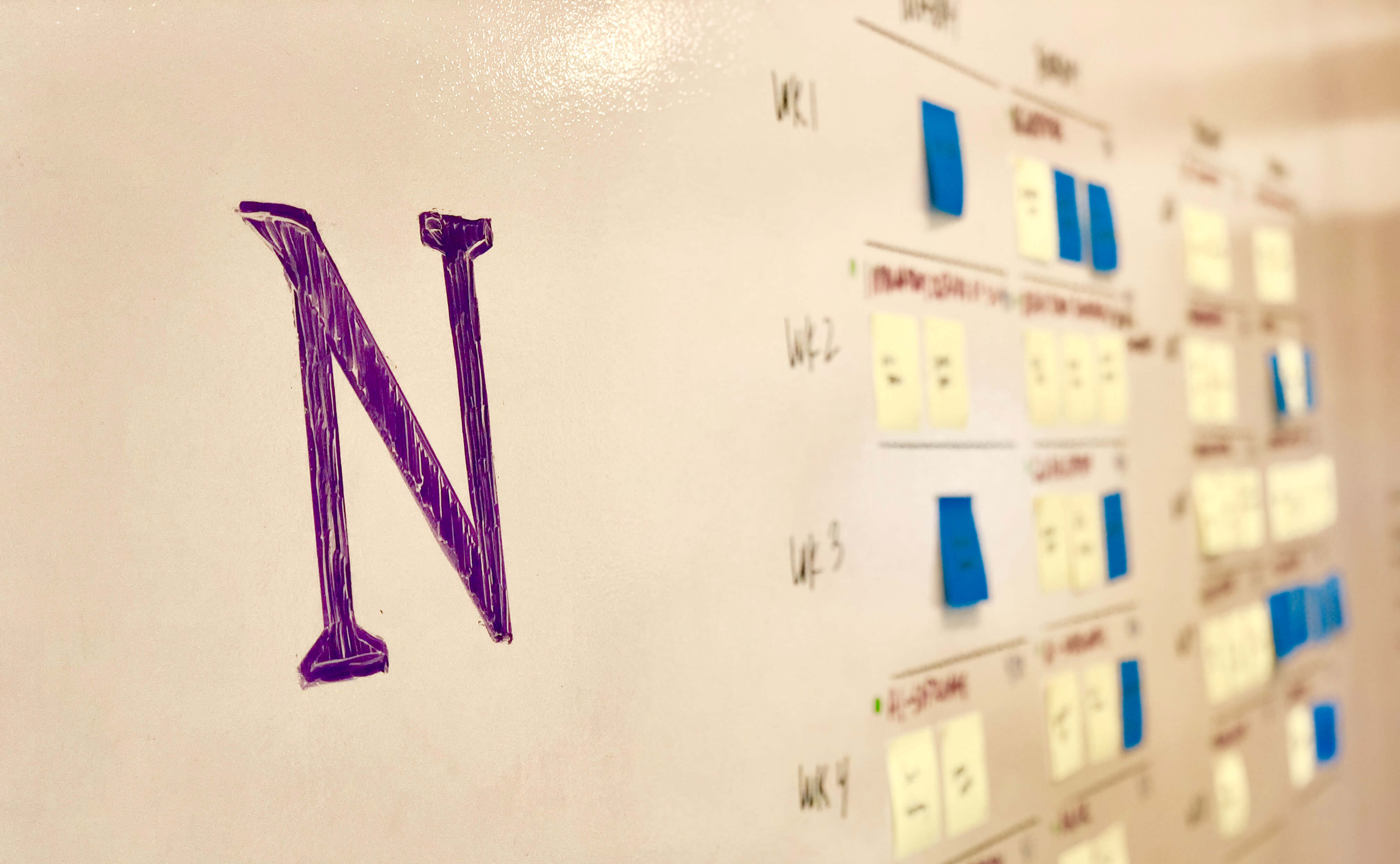 Teaching the Stars of Tomorrow

Teaching the Stars of Tomorrow

For the past ten weeks, Li and I taught an entrepreneurship course called Global Silicon Valley (GSV) as Adjunct Professors at Northwestern University’s San Francisco and Evanston campuses.

The class — inspired by all that we have learned while working at GSV — was focused on providing students a lens to the future and putting them at the intersection of the World’s biggest opportunities.

Over the course of the quarter, we taught 20 of the brightest (and curious!) minds at Northwestern. Additionally, we brought in 35 entrepreneurs, founders and investors as guest speakers to share their perspectives with the goal of preparing students for the exponential future they will move into. Our guest speakers included Jon McNeill (COO, Lyft), Michael Hillman (Head of Oculus, Facebook), and Jacob Jaber (CEO, Philz Coffee). (Disclosure: GSV owns shares in Lyft).

It’s safe to say that nothing prepared us for professorship.

We are both united by a passion for entrepreneurship and for founders and students building the future. Ultimately, we were inspired to teach because our class, ENTREP 395: Global Silicon Valley, was THE class we wanted to take as student entrepreneurs at Northwestern.

Despite the odds (and doubts), for generations we have consistently seen revolutionary founders defy gravity time and time again to create some of the World’s most dynamic companies. Thomas Edison was told he was “too stupid to learn anything” before he invented the lightbulb and founded GE.

Fred Smith took his company’s motto to heart — “whatever it takes” — and kept FedEx afloat at a blackjack table. Airbnb’s founders sold thematic cereal boxes at presidential campaign conventions (“Obama O’s” and “Cap’n McCains”) to raise initial capital for the company. And Jack Ma failed the Chinese college entrance exam three times and had a job application rejected by 90 companies (including KFC) before he founded Alibaba.

ENTREP 395 was a simple idea conceptualized while on a drive on Highway-101 one evening in May 2017. Over the course of teaching our class, we were challenged, humbled, and inspired. But most importantly, we are energized and excited to see what impact our Stars of Tomorrow will have on this World.

ENTREP 395 — Global Silicon Valley is focused on providing students a lens to the future and puts them at the intersection of the World’s biggest opportunities. The course covered major technology trends and brought in founders, investors, and key players in the startup ecosystem to share their perspectives and prepare students for an exponential future.

The course aims to offer students:

Below is a week-by-week outline of our class, which we taught from April to June 2018.

Overview: Megatrends are powerful technological, economic, and social forces that develop from a groundswell (early adoption), move into the mainstream (mass market), and ultimately drive broad changes to societies, industries, and entire economies (mature market). Change unlocks opportunities for entrepreneurs, and we believe that a disproportionate number of transformational businesses are created where megatrends converge with growth sectors of the economy. What are the themes driving the creation of the “Stars of Tomorrow”… the fastest-growing, most dynamic companies in the world?

Overview: Understanding demographics gives investors a more predictable view to the future. But when it comes to demographics, things aren’t always what they seem. Two years ago, the class of 2020 showed up on college campuses across the United States. This millennial generation grew up with Google at their fingertips and knew little of a life before the smartphone. With a global population that is booming, and the millennial generation having an increasing role in the economy, society and politics, how will this shape the future?

Overview: Looking in the rearview mirror, the economic engine for the last 100 years was the United States, Europe, Japan, and Canada. But the dynamics have shifted as the growth and opportunity surges to Asia and Africa, leading to the creation of massively disruptive companies. As a result, why are companies today — like Uber and Airbnb — born “global-first”? How do they scale to have a Global footprint?

Overview: Leading artificial intelligence expert Andrew Ng, the former Chief Scientist at Baidu and co-founder of Coursera, stated that “AI is the new electricity.” AI will be the lifeblood that powers the next wave of technology companies. It’s currently integrated in our daily lives in more ways than most realize. What are the leading companies and most innovative applications of AI and how will it impact the future of society?

Overview (Brands): A brand is a promise. Accordingly, great brands are created by consistently delivering a product, service, or experience that confirms that promise. It’s reality. It’s the truth. Great brands build customers by building trust. But for startups in emerging industries, how do they build a trusted brand among a community that is unfamiliar with change?

Overview (AR/VR): Virtual Reality (VR) had been pursued and promised since the 1950s, but the convergence of low-cost mobile hardware and powerful new software platforms is bringing it to life. In less than five years we are seeing ripple effects across digital media and beyond. What are the most promising hardware and software applications for AR/VR and what is overhyped?

Overview: Today, your mechanic knows more about your car than your doctor knows about your body. In a world where everyone can map their personal genome, healthcare gets a whole lot more personal, efficient, and effective. What are the greatest opportunities in Life Tech and regenerative technology that will improve human longevity?

Overview: Mobility today is powered by over 2 billion smartphones and digital devices that help people and products get from point A to point B. From ridesharing services like Lyft, to freight forwarders like Flexport, an emerging group of companies are creating novel mobility solutions powered by digital infrastructure.

Overview (VC): Everyday in America, 1,100 new businesses are formed. But everyday in America, 1,100 businesses fail. There’s only a 20% chance that a company survives beyond three years. Last year, venture capitalists invested in over 3,000 companies, but only 64 venture backed companies went public. In the new innovation economy and a significantly different era of public markets, how does venture capital play a role in supporting new businesses? What do VCs look for in companies and founders and how do they evaluate deals or new industries to invest in?

Overview (Fintech + Blockchain): Today, there’s an emerging belief and strong momentum in the idea that blockchain is the next major platform in computing. In the same way that the World went from mainframe to PC to Internet to Mobile — and in recent years, to Augmented and Virtual Reality — blockchain has the potential to be a transformational technology. What is the blockchain? What is the craze around cryptocurrencies and how will this impact the economy and society?

Overview: Knowledge is in fact power. And in a knowledge based economy and Global marketplace, it makes the difference for not only how well an individual does, but also how well a company and a country does. What leading new models of education will impact the World the most? How will education close the gap to allow everyone to have equal opportunity to participate in the future? And how does this all — in conjunction with automation — impact the future of the Future?

Overview: Elon Musk once said, “I’d like to die on Mars, just not on impact.” What are the revolutionary ideas, concepts, and companies that will impact humanity holistically and change the World for good?

ENTREP 395 would not have been possible without the support and help of Northwestern University. To the wonderful team at the Farley Center (Mike Marasco, Ria Hirsch and Vy Nguyen), Northwestern Alumni Engagement (Kristin Rodeno), and the San Francisco Campus (Lawrence Patrick, JP Salvador, and Daphne Wyse) — we are so grateful for your guidance and assistance. A special thank you also goes out to our 35 guest lecturers, who took time out of their days to join us for class to share their stories, insight and advice.

A HUGE thank you goes to our TA William Skinner, who played a tremendous role on our teaching TEAM, holding court and leading class in Evanston weekly. You’re a unicorn, William!

Finally, thank you to our team at GSV… Emily Ha and Nick Franco were our biggest cheerleaders in the back of class (Nick, we’d like to think you were there in spirit). Most importantly, we would be nowhere without the leadership and coaching of GSV’s Captain, Michael Moe, who has truly taught us that teamwork makes the dream work.

Today I Learned Who The Real Satoshi Nakamoto Is