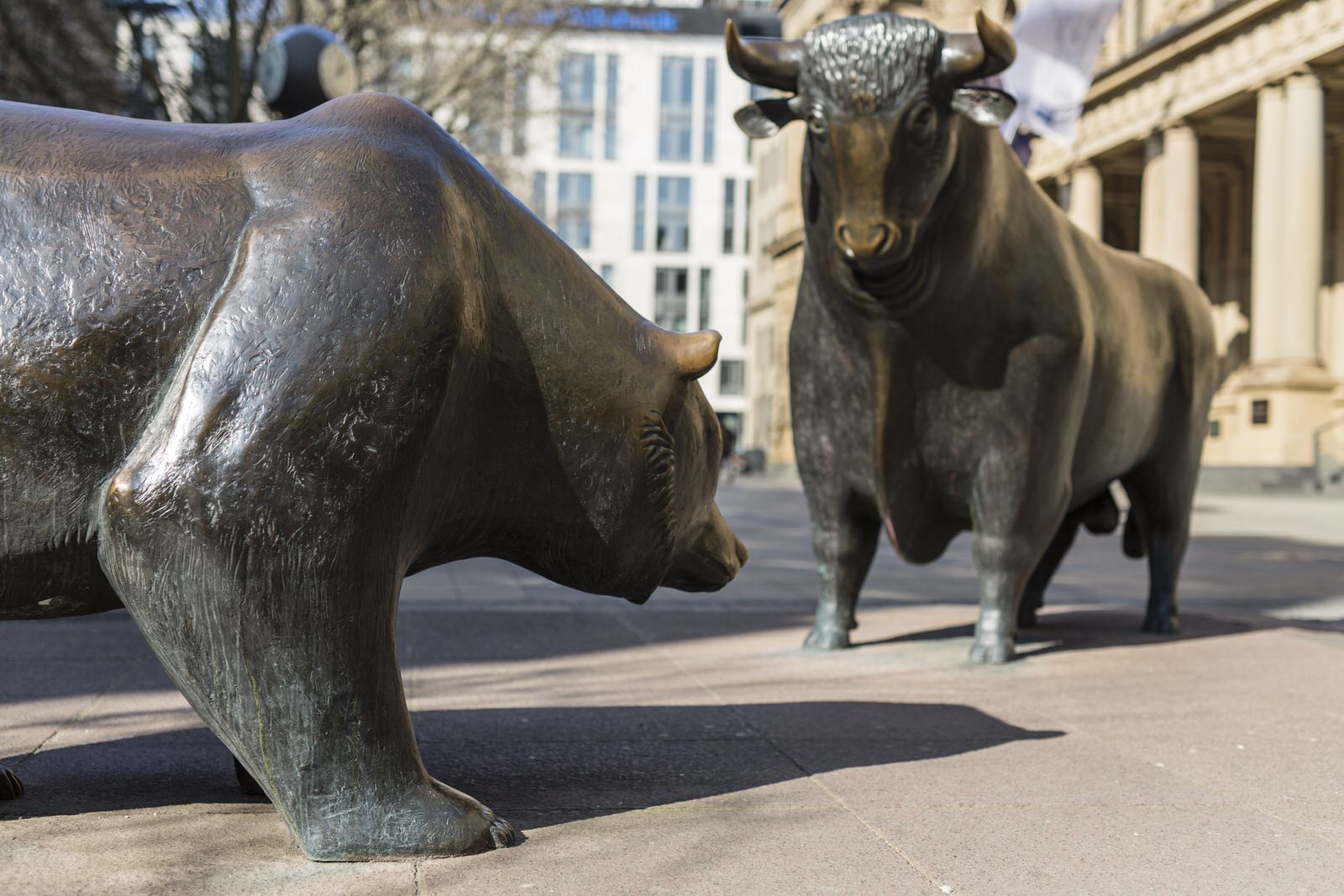 “Bull markets are born on pessimism, grown on skepticism, mature on optimism, and die on euphoria.”

For many, the singing of “Auld Lang Syne” can’t come soon enough. What started as a quiet correction amongst “FANGs and Friends” has snowballed into the verge of becoming a full fledged BEAR Market.

Individual investor sentiment is the most BEARISH it’s been in 5.5 years. Corresponding with that, there were $39 billion of outflows from equities last week according to Merrill Lynch.

“Joy to the World” was not the tune that was being sung by economists, as Europe’s and China’s economic data continued to weaken. This, coupled with the flattening of the yield curve, has started a “Recession” chorus out of the pessimist hymnal.

While we think it’s an interesting sport to predict the direction of the Economy and Market, we know we don’t possess those skills. And we don’t know anybody who does.

We do think it’s important to pay attention to data and sentiment, as fundamentals are what determines success over time. Extremes in the “crowd” usually signal a change in direction. The fact that investors are more “BEARISH” AFTER stocks have fallen significantly and are rushing to get out of stocks tells us it’s probably a good time to be loading up on the highest quality, fastest growing companies.

We also think about looking at MEGATRENDS and changes that occur in society that help us hunt in the right locations for opportunity. But when trying to create a framework around the future, it’s instructive to understand the past.

Five hundred years ago, people were born, grew up and died within a five mile radius. Effectively, your parent’s past was your future.

Then came a wave of innovation which connected people around the world in many different ways, starting with the Gutenberg Press in 1439. Other inventions such as the steam engine (1756), locomotive (1804), telephone (1876), automobile (1888), and airplane (1903) brought the world closer together one step at a time.

Moore’s Law, which was postulated in 1965, changed the pace of innovation and paved the way for massive adoption of technological improvements.

And while technology has been on a technology upgrade cycle — the original iPhone is virtually unrecognizable now — human capabilities and happiness have stalled. Despite the incredible advancements in technology and unfathomable improvements through technology upgrades, people’s lives aren’t keeping pace and in fact, people’s happiness is falling.

A major cause of unhappiness and stress is from the anxiety tied to always being connected to our mobile device. Hyperconnectivity as a result of technology has been attributed to increased levels of anxiety, depression and stress.

Time spent on mobile devices has gone from 20 minutes in 2008 to over three hours today. This is starting to have such a negative impact on society, that even kids are beginning to take notice. When a class of third graders from an elementary school in Boston was asked to design the perfect playground, their number one rule was “no cell phones”.

In the United States, suicide rates are up 30% over the past twenty years. Opioid deaths increased 45% to 75,000 casualties last year alone. That’s more than the number of people who died in traffic accidents. Add it up, and life expectancy for U.S. citizens actually fell last year.

As a direct reaction to this, the #1 class at both Harvard and Yale is on how to find happiness. It’s stunning that the best and brightest students are searching for more than how to become a “Captain of Industry” and actually want to find meaning to their lives.

While more people than ever now have the opportunity for a comfortable life, today, half of the world still lives on less than $2.50 a day or less. Over 22,000 children die per day from starvation, 2,000 die daily from lack of access to clean water, and 1.6 billion people — a quarter of the World’s population — lacks access to electricity.

In the United States, the SAT — the golden ticket to a prestigious university — shows a direct correlation between score and income bracket. Effectively, the SAT is the best predictor of how wealthy your family is. Not coincidentally, those in the lower income bracket are locked out of elite college. If you are from a family in the bottom quarries of income, you only have an 8% chance of graduating from college.

The net result is that today, if you are born poor in the United States, you are likely to stay poor. For the first time in our country’s history, there is no social mobility. Over 70% of people born at the bottom of the income ladder never make it to the middle rung. We have effectively evolved from a meritocracy to an aristocracy.

We’ve come full circle and today, your future is still determined by how well you select your parents.

“Imagination is more important than knowledge.”

Larry Page one said, “lots of companies don’t succeed over time. What do they fundamentally do wrong? They usually miss the future.” And to predict the future, you need to use a bit of your imagination.

Remember when your Mom used to say, “don’t get into a stranger’s car”? Businesses such as Uber, Lyft and Didi Chuxing have a combined market value of $150 billion, building massively disruptive businesses. Or when Dad said, “don’t meet people online”? Today, one in five marriages begin online.

To think about the future of the future – we need to use our imagination so people can obtain knowledge. Just how Uber and Lyft replaced the ridiculous process of hailing a car on a street by raising your arm — effectively fishing for a vehicle — we need to reimagine education and challenge conventional wisdom to ensure that everybody has equal opportunity to participate in the future.

People often say “education doesn’t scale” and that is it “tough to invest in education to generate returns.”

The same dynamics that have paved the way for disruptive global businesses to launch at lightening speeds — from Uber, which is upending the transportation industry, to Airbnb, which is redefining the hotel industry — are now propelling a new generation of rapidly scaling education and talent companies.

We call these platforms “Weapons of Mass Instruction” because they are increasingly enabling people to learn anytime, anywhere.

Venture capital investment in education has gone from $700 million in 2010 to $4 billion in 2017. To date, there have been 15 Chinese education IPOs and there are now eight education unicorns.

Challenging: “AI is Going to Eliminate All Jobs”

The story of the past few years is that “AI is going to eliminate all jobs.” It’s predicted that 50% of jobs are at risk of replacement in the next twenty years due to artificial intelligence and automation.

Renowned data scientist and Coursera chairman Andrew Ng has said that Artificial Intelligence is the new electricity. And what he means by that is that artificial intelligence will be ubiquitous, invisible and change life as we know it. Already, we’ve seen AI VC investment balloon from $810 million in 2012 to $14.4 billion in 2017. And PwC predicts that AI will add $15.7 trillion to the global economy by 2030. To put that in context, $15.7 trillion is larger than the size of the Chinese economy.

First, people saw AlphaGo defeating Ke Jie, the number one ranked Go player in the World. Coupled with the fact that robots can now do backflips, and people are terrified and scared.

But people forget that humans have been doing backflips for millennia — football players do backflips for showmanship — and also that cats jump two meters with little effort. No one is afraid of a cat taking away jobs. So, while a horse that can count to ten is an exceptional horse… it isn’t a great mathematician.

There is a huge opportunity for automation to augment and improve the way we live. Already, we’re seeing autonomous vehicles on the road from companies including Tesla, Waymo, Lyft and Uber. There are approximately 1.3 million car accident deaths annually. With autonomous driving, it is expected that there will be a reduction in 90% of road accidents… saving over a million lives.

With personalized learning and autonomous teaching, how many children’s lives can be saved and prevent from being left behind in an exponential future?

Challenging: “Learning Can Stop After College”

Winston Churchill gathered his advisors in the depths of WWII and said, “Gentlemen, we have run out of money. Now we have to think.” As a country, it was time to think.

Our old human capital pipeline hadn’t really changed at all since it was created at the beginning of the 20th century. It worked like this: You played from ages 0-5, you learned from 5-25, you worked from 25-65, and then you retired. In the 1900s, people had one lifetime job.

Today, millennials are expected to have over 15 lifetime jobs. Furthermore, the rise of the gig economy underscores a major shift in the future of work and talent development. 82% of millennial aspire to be flexible workers and already 60% and 40% of worked in China and the United States, respectively, are flexible workers.

To be prepared for an exponential future and in a world with smart machines, you can no longer fill up your “knowledge tank” until age 25 and cruise through life. Effective workers must refill their knowledge tanks continuously.

Kaizen is a Japanese business term meaning “continuous improvement.” An education corollary is GSV’s concept of “KaizenEDU,” which means “continuous learning.” In the new system of learning, people are expected to learn from the time they are born, to the time they retire… if they ever retire at all.

A headline in the Wall Street Journal from this month was that, “Job Openings Outnumbered Unemployed Americans.” For the first time, the number of unfilled jobs in the United States exceeded the number of unemployed Americans by more than one million. This signals a significant mismatch between the skills that unemployed works have versus the skills that employers are looking to hire for. It’s like trying to fit a square peg into a round hole.

To prepare for an uncertain future, we suggest the 7C’s to augment reading, writing and arithmetic for what a knowledge worker needs to know: Critical Thinking, Creativity, Communication, Cultural Fluency, Civic Engagement, Collaboration and Character.

Those skills, in addition to “learning how to learn,” will be the foundation for participating in the future.