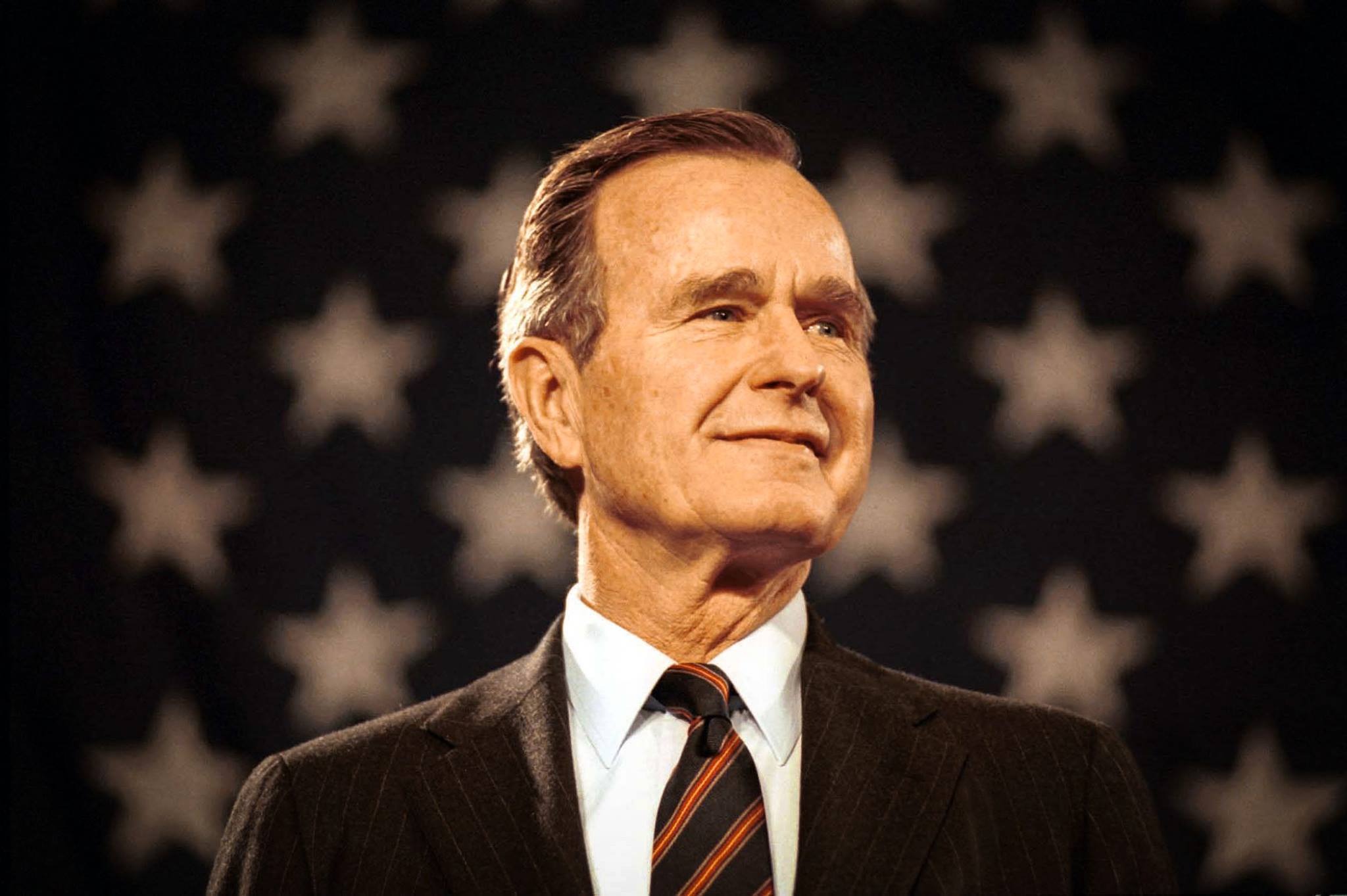 “I have been under constant criticism for being too cautious in my reactions to events. This was deliberate. I have not jumped up and down on the Berlin Wall.”

“He’s dumber than a rock… and lazy as hell.”

It was a much needed halftime break from the Circus when the Country took pause on Wednesday to honor and celebrate the remarkable life of the 41st President of the United States… George Herbert Walker Bush.

You couldn’t help but be a proud citizen of the United States of America, as leaders from around the World gathered and shared stories which highlighted the values, goodness, dignity and class of President Bush. We collectively put our chest out and held our chin up high because that’s what we believed being an American was… and he was OUR President.

One of the favorite things I read this week about President Bush was an article in the New York Times written by the comedian Dana Carvey where he wrote about the friendship he developed with President Bush following his loss to Bill Clinton in the 1992 election. Carvey did a hilarious but brutal imitation of President Bush throughout his Presidency, but President Bush called him up after he lost and asked him to perform at the White House to “cheer up the staff” (see the performance on YouTube here).

As bookends to a glorious middle of the week, on Tuesday our current President — the sell proclaimed “Tarriff Man” — had the CFO of Huawei arrested while he’s having dinner in Argentina with President Xi. And on Friday, 45 tweeted that our former Secretary of State is “dumb as a rock” and “lazy as hell”.

Given that investors hate uncertainty, it’s hardly shocking the Market dropped like a “rock” following a week of self inflicted wounds by the most powerful person in the World. Both NASDAQ and the S&P 500 were off approximately 4.5%, falling below their 200 day moving averages.

President Trump doesn’t have a monopoly on catalyzing chaos, as Theresa May in Great Britain has abundantly shown with Brexit follies. Ditto with President Emmanuel Macron in France and his execution of the “green tax” on gas.

What’s amazing is we are living in a time of abundance. As a society, we are healthier, wealthier and wiser but it’s not equal distributed. While more people than ever now have the opportunity for a comfortable life, today, half of the world still lives on less than $2.50 a day or less. Over 22,000 children die per day from starvation, 2,000 die daily from lack of access to clean water, and 1.6 billion people — a quarter of the World’s population — lacks access to electricity.

Last week, it was announced that 155,000 new jobs were created in the United States in November. The headline from the Wall Street Journal a few weeks back was “Job Openings Outnumbered Unemployed Americans” for the first time in modern history.   But there is a mismatch between peoples skills and where jobs are available. And it’s only going to get worse with the impact of Artificial Intelligence. Yet, Artificial Intelligence is projected to add $15.7 trillion to the Global Economy by 2030.

Despite the incredible advancements in technology and unfathomable improvements through technology upgrades, people’s lives aren’t keeping pace and in fact, people’s happiness is falling.

A major cause of unhappiness and stress is from the anxiety tied to always being connected to our mobile device. Hyperconnectivity as a result of technology has been attributed to increased levels of anxiety, depression and stress. Time spent on mobile devices has gone from 20 minutes in 2008 to over three hours today. This is starting to have such a negative impact on society, that even kids are beginning to take notice. When a class of third graders from an elementary school in Boston was asked to design the perfect playground, their number one rule was “no cell phones”.

In the United States, suicide rates are up 30% over the past twenty years. Opioid deaths increased 45% to 75,000 casualties last year alone. That’s more than the number of people who died in traffic accidents. Add it up, and life expectancy for U.S. citizens actually fell last year.

As a direct reaction to this, the #1 class at both Harvard and Yale is on how to find happiness. It’s stunning that the best and brightest students are searching for more than how to become a “Captain of Industry” and actually want to find meaning to their lives.

As we head into this week, and soon a New Year, I think it would be healthy to stop and reflect on the Memorial Service last week in Washington D.C., and how we can all be “points of light” into a World that desperately needs it.

One of GSV’s core theses is that Innovation is increasingly spreading around the World; Silicon Valley is no longer a physical spot between San Francisco and San Jose, but a mindset that’s going viral and global. “Pockets of innovation” are emerging everywhere — from expected locations like London, Stockholm, Beijing, to emerging hotspots like Paris, Bangalore, Shenzhen, to surprising new hubs like Tallinn, Bucharest, or Bologna.

With 2.5 billion smartphone users around the World, and with computing and storage cost almost at zero, today’s entrepreneurs can go from an idea to global scale in virtually no time.

New technologies and the adoption of AI are accelerating the pace of change in society. Meanwhile, big corporations are increasingly getting disrupted by young startups, pressuring those to retrain and re-adapt their workforce to latest technology trends. As evidence to this point, Coursera’s newly created B2B offering went from just 30 customers at the end of 2016, to now over 1200 customers. (Disclosure: GSV owns shares in Coursera).

There has been a significant increase in innovation in Asia over the last five years (China specifically). Didi is now larger than Uber, Ant Financial is dominating mobile payments and is the largest private company in the World, and ByteDance is emerging as a Global leader in AI.

Lately, innovation is also thriving in Europe. Several key catalysts have been fueling the local ecosystem in recent years. Government’s have been shifting stronger attention towards tech and AI, and have changed tax and immigration laws to incentivize tech talent. Already, Europe has more tech developers than the U.S. — 5.7 million compared to 4.4. million, and that talent wants to stay in Europe. In Atomico’s most recent survey, European entrepreneurs were asked whether they would choose to build their new company in Europe or abroad, were they to start over. The vast majority, or 83%, said they would stay where they are or stay within Europe, while only 6% said they would move to Silicon Valley. Not surprisingly, Europe’s tech industry is currently growing 5x faster than the overall EU economy.

Accordingly, there has been a strong inflow of venture capital investments, which is expected to hit $23 billion this year. In parallel, the number of tech IPOs is growing every year, as is the number of unicorns.

Already, notable success stories are showing up across Europe. Spotify’s public listing in the Spring was a major landmark for the continent. The Stockholm-based streaming leader has been fending off competitors Apple, Amazon, and Google for years, and continues to grow at a solid pace. Spotify’s 87 million paid users are growing at a strong pace, up 40% year-over-year. (Disclosure: GSV owns shares in Spotify).

Bucharest, Romania might not be the place to associate with innovation, but that is changing. Romania’s UiPath is the emerging leader in the Robotics Process Automation (RPA) field. The company creates AI-based systems (robots) that handle the flow and integration of back office apps. The software uses computer vision to understand what is happening on the screen, and to automate repetitive task — freeing up employee’s time to focus on more complex work.

Founded in 2012 in Bucharest, UiPath has raised $448 million to date, with Kleiner Perkins, Accel, and Capital G as its largest investors. A few months ago, UiPath raised $225 million, valuing the company at $3 billion. Notably, UiPath is one of Accel’s largest current investment.

Another payment leader, Netherland-based Adyen, send strong impact waves across the European tech scene when doubling to a $14 billion market cap at its IPO. Adyen is a one of the World’s leading payment platforms, which counts companies such as Netflix, Facebook, Spotify, Uber as customers. Impressively, earlier this year eBay replaced PayPal with Adyen as its primary payments provider. In 2017, Adyen did €1 billion in revenue, growing +53% (on €108 billion of payment volume), and was profitable with €71 million in net income.

Looking ahead, there is a growing list of attractive and disruptive European startups that could soon become global leaders. There are clear signs of Innovation across Europe, with a rising number of Eurostars on the horizon.